A dozen years of marriage is a great cause for celebration, so whether it is you yourself or your nearest and dearest who are approaching the 12th anniversary, marking the occasion with a gift that is both meaningful and significant to the receipients is paramount. Traditional gifts are always a popular choice thanks to their deeper significance, and they are always received with appreciation as the effort put into choosing and sourcing something so appropriate always means a lot. Give a lasting memento to the celebrating couple by surprising them with a traditional 12th anniversary gift that will be cherished for many years to come and that will form an enduring commemoration of this anniversay year.

What to Choose as a Traditional 12th Wedding Anniversary Gift

Always more appealing that a simple generic gift, a traditional present has a symbolism that is unique to each anniversary year. The 12th anniversary is associated with its own traditional theme, silk and linen fabrics. While these make lovely and beautiful gifts, they also have a special significance to the celebrating pair. Linen featured heavily in the Bible as a material of purity, being worn by the highest heavenly bodies, the angels. This reflects the pure nature of a loving nature, where the husband and wife are entirely committed to each other. Silk on the other hand has connotations of luxury and elegance and reminds the couple of the sensuous side of their relationship. A gift of silk is a wish for the couple’s future, and a hope that it will be as smooth as silk. A gift of stylish bedlinen to match the couple’s décor would be a lovely reflection of the traditional material associated with this marital year, or perhaps an embroidered linen tablecloth to adorn the dining table and to be used for a wide range of special and everyday occasions, calling the giver to mind every time. Or choose a silk gift, with garments being a good choice for both men and women. A smart silk tie would be an ideal 12 year anniversary gift for him will a luxurious silk blouse would be a much appreciated 12th anniversary gift for her. Couples who delight in luxurious home décor would be delighted to receive a pair of silk cushions or pillows, or perhaps a pair of silk bathrobes for him and her, monogrammed with the couple’s initials would bring a bespoke touch to a special 12th anniversary gift. 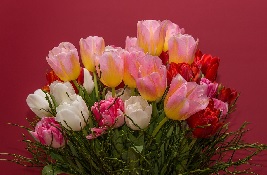 When it comes to choosing traditional gifts for the 12 year anniversary, flowers often come out on top. In fact, flowers are the top choice for many gift givers for any anniversary year as they are one of the best ways of sending their loved ones a message of love and appreciation at this special time in their lives. Flowers are able to brighten the lives of any couple in a way that other gifts cannot and giving the traditional flower associated with the anniversary year is a fine way to add an extra layer of meaning to the present. The 12 year anniversary’s special blossom is the peony, with its hidden meaning in the language of flowers of wealth and riches, an entirely appropriate sentiment to wish for any celebrating pair. The full, round blossoms of the peony are said to represent the fullness of a successful marriage and are a beautiful symbol of romance, joy in marriage and a wish for good fortune in the future. What better way to give your nearest and dearest a special anniversary wish than by sending a bouquet including these lovely blooms? For other givers, the best flower to choose as an anniversary gift for loved ones will always be the rose. Spectacular and magnificent, their connotations of appreciation, beauty and love make them an especially relevant gift for an anniversary couple and giving a bouquet of these lovely blooms is the perfect demonstration of your esteem for your loved ones and shows in a remarkable way how much they are cared for. For a stunning rose gift that will endure as a lasting reminder of this anniversary date, give an Eternity Rose. Each handcrafted blossom has been made from a genuine rose blossom, selected especially for its radiance and preserved eternally in an intricate glazing process to maintain its splendour for a lifetime. Every bloom is finished with a trim of purest 24 karat gold and this gift represents the ultimate reflection of your esteem for your loved ones on their 12 year anniversary. Unlike freshly cut flowers, this gift will not fade or die within a few days but will remain resplendent for years to come, its magnificent appearance forming the focal point of the room in its luxurious leather display case.

Many anniversary years have their own special gemstone and the 12th anniversary is associated with agate, one of history’s oldest known stones. Available in a wealth of colours from brown to red and from black to orange, this gemstone when given as a piece of jewellery is the ideal and traditional way to celebrate the 12th wedding anniversary and is a lasting way to commemorate this special date in a couple’s lives. Giving a lovely bracelet, pendant necklace or a pair of elegant drop earrings featuring this stunning gemstone is a perfect 12th wedding anniversary gift for her.