With just one year left before the ruby wedding milestone at 40 happy years of marriage, the 39th anniversary can sometimes be allowed to drop by the wayside with a very low key celebration, and sometimes no celebration at all.Yet with every anniversary year being equally important, you should take the time to show your admiration for the happy couple’s success by presenting them with a memorable and significant token of esteem. Avoid the standard, dull generic presents and go instead for something a little more unusual yet with a meaning and relevance that will touch the recipients’ hearts. Here you can see some inspiring 39 year anniversary gift ideas that you can incorporate into your choice of present to ensure that you are giving the pair a memento that will endure a lifetime. 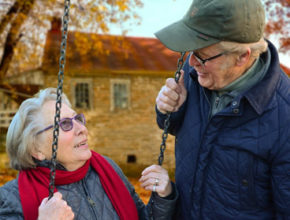 While many marital years are well known for their own particular symbols and themes, the 39th anniversary is not a famous occasion like the silver or golden weddings. In the 1920s, it was common to only celebrate a few selected years of marriage, and that is why the original gift lists linking particular themes with anniversaries only chose the milestone years like the first ten years and the fifth and tenth anniversaries after that. Later on, the significance of other anniversaries was realised, and more marital years were added to the list including the 39th anniversary. This meant that each and every year had its own traditional symbol with which the year could be celebrated. The theme assigned to the 39 year anniversary gift was lace, a beautiful and intricate fabric which has a symbolic meaning of its own. When presented to a couple as a traditional thirty ninth anniversary gift, it represents the intricacy and complex interwoven nature of the strands of the couples’ lives, entwined together into a beautiful work of art that will endure forever. Lace has a long and fascinating history, with at least two different nations claiming that they were its original inventors. Whether the Flemish or the Italians were the ones to create this art form, it is known that lace making originated around the 14th century, although it did not really become popular in a widespread way until the 1500s when it was used as a way of decorating home textiles and garments. Although the first lacemakers used gold, silver and silk threads to work their fabrics, today it is more usual to use cotton threads. Nevertheless, the result is no less impressive or attractive. There are many different ways of producing lace, yet all are time consuming and expensive. Even today, lace is often used to make luxurious clothing and decorative items for the home such as doilies and tablecloths. Giving your loved ones a gift such as this made from lace is a wonderfully traditional thirty nine year anniversary gift that will impress due to its exquisite appearance and luxurious nature.

There is also a traditional gemstone which is associated with the 39th wedding anniversary – agate. A splendid and attractive stone, agate is recognised by its classic fine banding within its structure. Agate was named by a Greek philosopher who is said to have found the stone while he was sitting by the river on the island that is now known as Sicily in the 3rd century BC. There are multiple varieties of agate, with the most common being Mexican agate, also sometimes called Cyclops agate as it features a single eye. There is also Turitella agate, which is made up of fossils and has a particularly unusual look, Greek agate, famed for its pale colouration, and Brazilian agate which is often chosen for decorative carvings because it features characteristic quartz crystals in its internal structure. There are some other types of agate which are less well known but no less attractive including, interestingly, one called Blue Lace agate, which would be a fantastic present to give loved ones on their 39th anniversary as it incorporates two of the themes from this marital year. Traditionally most often used to make jewellery, there are other agate objects which you could give to your loved ones on the occasion of their anniversary, including paper knives, ink stands and bowls. Whether they would prefer something practical or decorative, special couples are certain to appreciate an agate gift.

There are many traditional 39 year anniversary gifts that you can choose from to give your loved ones, from tablecloths to jewellery, yet sometimes, your deepest sentiments and best wishes can only be truly expressed with a bouquet of flowers. Roses are among the most popular traditional 39th wedding anniversary gifts for her and him because of their message of love and romance and their stunning appearance. Alternatively, impress your loved ones even more with a luxurious and enduring 39th anniversary gift of a glazed Eternity Rose. Made from a hand plucked natural rose blossom, every flower is fashioned by skilled craftsmen into an opulent and striking work of art that is entirely one of a kind. Trimmed with pure 24 karat gold, every bloom is presented in a stylish leather case, ready to be displayed in any room of the couple’s marital home, bringing a touch of magnificence and sophistication with it.