27 years together is a long time, so don’t let the occasion go by without commemorating the event with your loved ones, even though this is not a milestone year. Choose a meaningful and signficant gift to show your friends or relatives how much you care at this important time in their lives together by opting for one of the traditional themes associated with 27 years of marriage. Although the material linked with this year is not famous like silver for the 25th anniversary or gold for the 50th, there is still a symbolic theme that would make any gift that incorporates it more thoughtful and appropriate while still being a present that your loved ones will treasure for a lifetime. 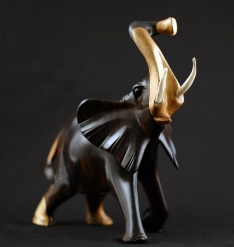 The traditional theme of the 27th anniversary is sculpture, representing the meticulous craft that goes into a long enduring marriage. In the same way that a sculptor spends years honing his craft and working to ensure that every part of his sculpture is perfect, so a couple have spent 27 years working on perfecting their marriage into a thing of beauty. As a sculpture is beautiful in the eye of the beholder, so is a happy and successful union that has been fashioned into a work of art by a dedicated and patient couple. As sculptures still endure centuries after their creation thanks to their strength and robustness, so has a long lasting marriage weathered the elements of 27 years of married life to emerge unscathed and perfect even after storms and showers. Giving a gift of a sculpture is something that has a long heritage and an eminent history. Originally, sculptures were only created using wood or stone, carving into the material to create an image. However more recently sculptures have been produced using a host of other methods including casting metals, modelling with pottery or clay or even assembling models using a range of other materials. The art of sculpture in the west began in ancient Greece, while in the medieval period, sculptures were most commonly seen in churches and cathedrals to show religious devotion. During the Renaissance in Europe, sculpting took off in a big way and many artists tried their hands at the art including Michaelangelo, who produced the world famous David which can still be seen today. While many people think of sculpture as a large public work, in fact giving a small sculpture as a personal object is a practice going back to prehistoric times. There are many sculpture gifts you can select to reflect this anniversary theme for your loved ones, including those made of glass, bronze, pottery, wood, metal or even plastic. While the most common topics for sculpture include human or animal figures, some of the traditional anniversary themes include an intwined couple or a heart shaped sculpture.

What About a Twist on the Traditional Sculpture Theme?

Perhaps you don’t like the idea of giving a sculpture to your loved ones? Then why not splash out on an expensive but wonderful 27th anniversary gift such as a dream vacation to a place connected with sculptures such as Greece, the motherland of western sculpture, or Florence, famous for the sculptures in the Piazza del Signoria and Michaelangelo’s David in the Accademia di Belle Arti? If you are artistically skilled, why not save money and create your own handmade sculpture for a truly personal and bespoke gift? Or if you lack the skill, you could always arrange a pottery class for the couple to make their own special commemorative artwork.

Perhaps you would like to give a more personal trinket to each partner as an enduring memento of this anniversary year? Then the traditional stone for 27 years of marriage is jet, a minor gemstone with a lustre and appeal all of its own. Used in the creation of ornaments and decorations since the neolithic period, this gorgeous black stone was very popular in the Victorian period and during the 1920s so you may even be able to source a vintage piece as your twenty seven year anniversary gift. Rumoured to protect the wearer from any harm, a pair of jet cufflinks are a stylish twenty seventh anniversary gift for him, while a jet brooch would be a stunning 27th anniversary gift for her.

Give Flowers as a Twenty Seven Year Anniversary Gift

Giving flowers is a tried and tested anniversary classic that will never disappoint the recipients. There are so many varieties to pick from that you are sure to be able to create an anniversary bouquet that the couple will truly love, whether they have simple tastes or extravagant and eclectic styles. Whether you opt for a hand tied creation or a dramatic display, your loved ones are sure to be delighted to receive a glorious bouquet as a 27th wedding anniversary gift. While there is no traditional flower associated with this anniversary year, you could capture the essence of the jet gemstone theme by choosing a black glazed Eternity Rose. There is no more elegant or luxurious way to show your deepest sentiments to your loved ones than by presenting them with this lavish and magnificent gift. Made by hand from a single natural rose blossom, each flower is intricately glazed and trimmed with pure 24 karat gold to produce a singular work of art. When presented in its own stylish leather case, it is perfect for display in the marital home as a lasting and opulent token of esteem that will always stand testament to the couple’s love.