38 years of marriage is only two years away from the ruby wedding milestone, so it is no wonder that often this marital year gets overlooked. Whether it is your friends or your relatives that have reached this event, you should never let the day slip by without marking it in some way. Every anniversary represents another great success for the couple, particularly in these modern times, so take the time to congratulate your loved ones and to show them your admiration by surprising them with a gift that is truly significant. A memorable gift that has been selected with thought and effort is the best way to convey your best wishes to the lucky pair and to wish them good fortune in the years still to come.

When you want to give a gift that has an extra layer of relevance and meaning, you should think about giving a traditional gift. While the first gift lists associating materials with significant anniversaries in the 1920s did not mention the 38th year of marriage, there have been more recent lists which do include this marital year. Originally, only the first ten matrimonial years together with every fifth year following were picked out for particular attention as milestones but in later years, it was realised that every single anniversary has its own importance and therefore the omitted years were given their own individual symbol. The 38th anniversary was linked to two different materials, beryl and tourmaline. These two gemstones are ideal thirty eighth anniversary gifts thanks to their beauty and value, and a gift of either would form a memorable and enduring memento of this special anniversary year. 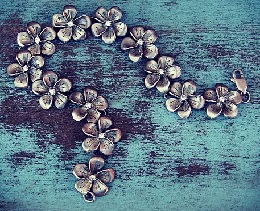 Beryl is one of the themes linked with the 38th year of marriage and is a special and valuable gift to give your loved ones on this important event. Many people are unfamiliar with the name beryl, and are surprised to discover that there are many gemstones with different names which are actually varieties of beryl. Although its name derives from the old French and Latin words meaning “precious stone with the colour of water”, this pretty stone actually comes in a wide spectrum of colours. One of the most famous types of beryl is known as aquamarine, a blue gem which is most commonly found in Madagascar, although there are many other localities in which it is mined including several areas of the United States as well as Columbia, Malawi and Kenya. Emeralds are also a type of beryl, which is a little known fact. These stunning green stones have been used to make jewellery for hundreds of years, and were used by the ancient Egyptians. Rare and valuable, this stone is the official traditional anniversary material for the 55th year of marriage in its own right. There is also a golden form of beryl as well as a colourless variety called goshenite and a pink version which is sometimes referred to as pink emerald. There is also a red form of beryl although this is only rarely found. If your loved ones have an appreciation for beautiful jewellery, why not give them an elegant piece decorated with beryl as a thirty eight year anniversary gift. There are many colours and styles to choose from, set in either gold or silver, so it should be easy to choose something that perfectly matches your loved ones’ tastes. A pair of stylish beryl cufflinks would make a fabulous traditional 38 year wedding anniversary gift for him, while she is sure to appreciate a stunning beryl necklace or pair of earrings.

Tourmaline Gifts for the 38th Anniversary

The 38th anniversary has two gemstones associated with it, the second being tourmaline. Taking its name from a Tamil word, this semi-precious stone can also be found in several colours including black, yellow, blue, red and green. Found in many locations all over the world, today the majority of the world’s tourmaline is mined in Africa and Brazil. If you would like to present your loved ones with a tourmaline traditional 38th wedding anniversary gift, jewellery is an obvious choice of 38th anniversary gift for him or for her. You may also be able to find some stylish home ornaments made from tourmaline which your loved ones may appreciate such as ornate tourmaline bookends. 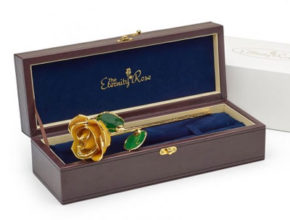 Flowers always impress and delight, so feel free to select this option as a tried and testing popular 38 year anniversary gift. As there are no traditional flowers associated with this year of marriage, you can feel completely free to select any blooms that you believe will be most appreciated by the recipients, whether that be something extravagant or something subtle and simple. Roses are one of the most commonly chosen anniversary bouquets because of their exquisite appearance and the meaning of love and romance that they bring with them. Your loved ones are sure to be delighted to receive such a magnifient display, but they will be even more impressed if you surprise them with a longer lasting memento of this anniversary occasion. A stunning glazed Eternity Rose, made by hand by talented artists is one of the finest ways to show your heartfelt emotions to your friends and family. Created from a single beautiful bloom that has been preserved in an intricate glaze and trimmed with pure 24 karat gold edging, each piece is a unique work of art that will last a lifetime. When presented in its own prestigious leather display case, this luxurious gift will stand testament to the couple’s love and will be a focal point in any room of the marital home.